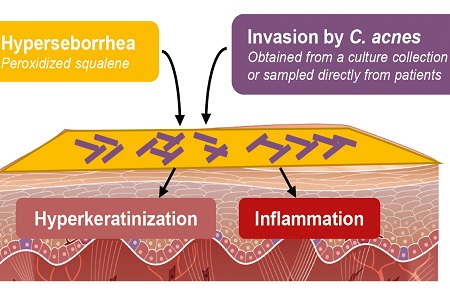 The advanced research teams of Silab Softcare have developed a 3D in vitro model of reconstructed epidermis that mimics acneic skin.

The characterisation of this model has just been published in the scientific journal Experimental Dermatology.

Acne is an inflammatory skin disease involving four essential components: hyperseborrhea combined with a modification of the composition of sebum, colonisation by Cutibacterium (C.) acnes, in particular the virulent phylotype IA1, hyperkeratinisation and a secreted inflammation.

Most 3D models mimicking acneic skin independently use hyperseborrhea or invasion by C. acnes to induce the characteristics of acneic skin. However, as these two factors are inter-related at the early stages of the pathology, the aim of this work was to develop a 3D model combining sebum alteration and invasion by C. acnes. In this model, reconstructed epidermis was treated simultaneously with peroxidised squalene and C. acnes phylotype IA1 obtained from culture collection or isolated directly from acneic patients.

The combination of these two factors induces acne-like keratinocyte responses, such as hyperkeratinisation and inflammation, thereby providing a model exhibiting all the characteristics of acneic skin.

“The detailed characterisation of this new in vitro model proves that it is totally suitable to mimic acneic skin and to be used as a screening tool for the development of acne treatments,” said  Marine Laclaverie, in vitro Innovation Project Leader.

The 3D model resulting from this work has enabled the company to demonstrate the pharmacological activities of Acnesium, a natural active ingredient developed by Silab Softcare to treat the clinical signs of slight to moderate acne in adults.

Produced from the pericarps of immature pomegranates, Acnesium restores homeostasis to acneic skin by targeting the four major components of this pathophysiology: it restores sebaceous gland activity to normal, controls colonization by C. acnes phylotype IA1, has a keratolytic action and reduces inflammation. Combining rapidity of action and efficacy, this high-tolerance care product improves the general aspect of the skin and thereby patients quality of life.

Celebrating 50 years and a new title

INOLEX is a leading global cosmetic ingredient company at the forefront of innovation in the categories of alternative preservation, silicone alternatives, conditioning agents, film-formers, and palm alternatives. Guided by the principles of green chemistry and INOLEX’s commitment to ingredient safety, our cutting-edge sustainable and plant-based...

Barentz Personal Care offers a comprehensive portfolio of ingredients for skin- and hair-care applications, colors and fragrances. Our broad, but carefully selected ranged of ingredients comprises specialty ingredients such as high-performance actives, multifunctional ingredients and texture enhancers, to meet some of the most challenging...