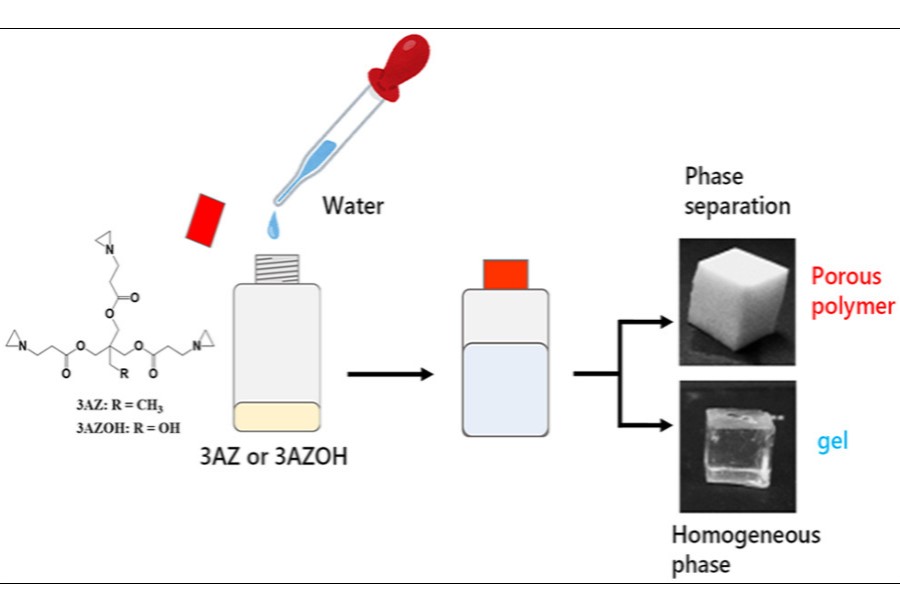 A team of Japanese scientists has discovered how to produce polyethylenimine--based network polymers by simply dissolving triaziridine compounds in water.

Although polyethylenimine (PEI) is a widely used branching polymer, its constituent monomer—aziridine—is highly toxic and not available commercially.

PEI has an astounding number of practical applications, including detergents, adhesives, cosmetics, industrial agents, CO2 capture, and even cellular cultures. In general, PEI is synthesized by the ring-opening polymerization of ethylenimine, also known as aziridine. When produced this way, the result is a liquid polymer with a branching structure.

Despite its huge potential, PEI is held back by the fact that ethylenimine is a highly toxic substance. Because this precursor is commercially unavailable, it is rather difficult to conduct experiments aimed at controlling the morphology or state of PEI.

To tackle this problem, a research team from Shibaura Institute of Technology (SIT), Japan, has focused on developing new PEI-based network polymers.

Researchers tested two triaziridine compounds and one of them could consistently yield a porous polymer network after reacting with water.

Its complete chemical name is 2,2-bishydroxymethylbutanol-tris[3-(1-aziridinyl)propionate] and it can be abbreviated as ‘3AZ.’

The team discovered that dissolving 3AZ in distilled water at temperatures in the modest range of 20 to 50 °C was enough to open up the aziridine groups and cause the 3AZ monomers to link with each other.

The result, under most temperatures and initial 3AZ concentrations, was a porous polymer phase.

The team analyzed the morphology of the porous polymers via scanning electron microscopy. While the synthesis temperature seemed to play no role in this regard, different concentrations of 3AZ resulted in different particle sizes, ranging from 1 to 5 μm.

On the contrary, the synthesis temperature did affect some of the mechanical properties of the porous polymers, such as their Young’s (elasticity) modulus. Notably, all the porous polymers could withstand compression tests of 50 N.

Being able to tailor the morphological and mechanical characteristics of PEI-based porous polymers is a big advantage, even more so when all that is needed is adjusting a simple reaction with water.

“Water is an ideal solvent for chemistry because of its eco-friendliness, availability, and sustainability,” said Professor Naofumi Naga of the Graduate School of Engineering and Science at SIT.

"Our paper reports one of the easiest methods to obtain a PEI-based network polymer known to date," he added.

In addition to the versatile properties, the team found that their porous polymers could absorb various solvents irrespective of their characteristics, including hexane, acetone, ethanol, dichloromethane, and chloroform.

Overall, this study will hopefully bring novel PEI-based polymers to the limelight. With eyes set on the future, Professor Naga and colleagues expect to find new uses for these compounds.

“Processing and chemical modification of the 3AZ porous polymers will likely expand their fields of application, and investigations on these aspects are already underway,” he added.