Revealing the secrets of youthful skin with new ‘agebiotic’ 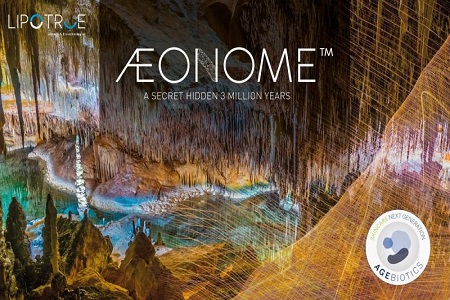 Æon or Eon in Latin means “vital force & eternity" which comes from the Ancient Greek God of the ages and time, “Aion”, also known as Chronos. This term was also used in the “allegory of the cave” by philosopher Plato to denote the world "behind" the perceived. As a simile, the skin’s microbiota, with more than 7,000 species, is the unseen world behind the secret for a youthful skin appearance that unlocks Æonome from Lipotrue for us.

Discover the hidden secret of an ancient underwater cave located in Mallorca’s Island, for which access is restricted to only researchers. This cave has remained preserved and protected from outside for more than 3 million years with a unique microbial community. Exploring the cave’s labyrinthic galleries, Æonome, unveils itself as an agebiotic, a new approach to skin’s microbiome to unlock ageless properties. So, what is an agebiotic?

Looking in greater detail, an agebiotic is a prebiotic metabolised by the commensal cutaneous microbiota enhancing the release of ageless postbiotics. Æonome, as an agebiotic, induces the release of antioxidants by a balanced microbiota protecting skin from visible signs of ageing. Æonome is metabolised by the commensal cutaneous  microbiota enhancing the production and release of antioxidant metabolites (e.g. coumaric acid), protecting the skin cells from oxidative stress. Thus, it increases the ability of keratinocytes to produce ageless proteins involved in skin integrity, dermo-epidermal junction cohesion and endogenous antioxidants.

To learn more click here to register for the exclusive webinar, April 23 at 10AM CET.

First issue of Personal Care Global on its way

As a proven innovator in the development of dependable, robust testing solutions, Charles River continues to set the standard for managing microbial quality control. We’ve purposefully built our portfolio to deliver the most comprehensive and flexible set of microbial solutions available from one provider.
Our industry-leading brands create an...