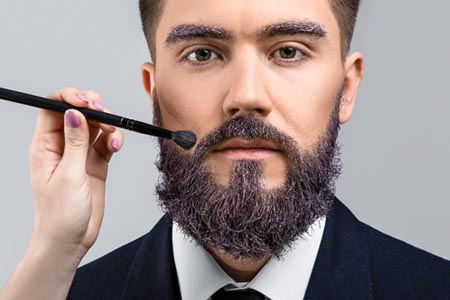 Given the scale of the cosmetics industry, it is incredible that it has become this size with large sections really only marketed towards 50% of the population. Male grooming was valued at $57.7billion (£44.6billion) in 2017 and is steadily growing according to Research and Markets.

The market research company estimated that male grooming will reach $78.6billion (£60.6billion) by 2023.1 This has been achieved with one of the key pillars of the overall personal care industry, colour cosmetics, remaining a niche area for men.

But this major dividing line that has traditionally separated products for men and women appears to be crumbling as more makeup product lines designed specifically for men appear on the shelves.

It is another surprise that it is such a niche sector at the moment, as there have been many times throughout relatively recent history when makeup for men was commonplace. From 4000 BCE until Victorian times (mid-19th Century), men were frequent makeup users.2 Certainly in Europe during the 17th and 18th Centuries, makeup was commonly applied by high status men. Skin was whitened (extremely dangerously) using lead, while cosmetics were also used in hair and in the form of ‘beauty spots’.2 In general, the trend

We Ichimaru Pharcos a global company that contributes to the “health and beauty” of people all over the world by providing high-quality products through research/development and technology innovation in Japan.
After the establishment in 1959, ICHIMARU PHARCOS has become a global leader in Research and Development of natural active ingredients...