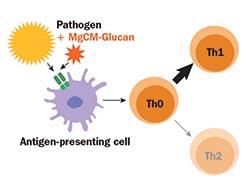 The high prevalence of allergies, for example skin eczema, in the industrialised world can be explained by an unbalanced immune system because the defence reaction against allergens involves overactivation of the T helper cell Th2 pathway.

This causes immunoglobulin E antibody production and ultimately leads to histamine production and an allergic reaction, characterised in the skin by dryness, redness and itchiness. Suppression of the Th2 pathway by Th1 could alleviate allergic reactions. Treatment with a new modified cosmetic active derived from baker’s yeast cell wall, MgCM-Glucan, leads to a suppression of Th2-activated allergic response. Additionally, MgCMGlucan improves the skin barrier, smoothness and hydration for an increased wellbeing of the skin.

In the past few decades, there has been a significant increase of allergies in the industrialised world. This does not only include the obvious allergies such as asthma and hay fever; many suffer from eczematous skin, which is characterised by chronic skin dryness, redness, itching, and inflammation. Notably, a general hypersensitivity and malfunctioning of the immune system seems to be the common cause since sufferers from eczema are prone to develop other allergic conditions.1

Although a hereditary component definitely plays a role in developing eczema, genetics alone cannot explain the rise in eczematous skin diseases since the last century. It has been recognised that environmental factors strongly influence the number of skin eczema occurrences as well as their severity. Indeed, epidemiological research showed that people living in urban areas in smaller size families experience eczema and other allergies far more often than those in rural communities.2 Based on this, the ‘hygiene hypothesis’ was postulated in 1989.3 This hypothesis links the reduced contact with viral and bacterial pathogens during childhood to a skewed immune system development – meaning that too clean an environment can lead to hypersensitivity and allergic reactions later on.

The hygiene hypothesis can be best explained on a molecular level with the type 1 T helper (Th1)/type 2 T helper (Th2) immune-balance model. Upon exposure to a pathogen, antigenpresenting cells, such as dendritic cells in the skin, will activate T helper cells, which then in turn secrete cytokines to signal downstream and guide the immune response.

There are two different paths this immune response could take, depending on which T helper cell type is activated. The first path, which involves the helper cell Th1, activates macrophages as a defence against the pathogen (Fig. 1a). Macrophages are cells of the innate immune system, which combat local inflammation by engulfing and digesting microbial intruders. In contrast, the immune response path involving Th2 stimulates B cells, which are part of the adaptive immune system (Fig. 1a). These activated B cells produce immunoglobulin E (IgE) antibodies,4 which bind to mast cells, that in turn release histamine and can subsequently lead to allergic sensitisation.

Healthy individuals possess a balanced immune response, where the appropriate path is chosen depending on the pathogen. In most cases, a Th1-mediated response involving macrophages is sufficient to eliminate pathogens and the Th2 path should not be active. To ensure this, the active Th1 path is able to inhibit Th2 activation. In people suffering from allergies however, the immune response is skewed towards the Th2 path.

The Th1/Th2 story corresponds to the hygiene hypothesis: in people that are ‘immune trained’ by coming into regular contact with pathogens that activate Th1, a healthy response can develop. For people who experienced limited exposure to pathogens at a young age because of a too sterile environment, the immune response is skewed from a healthy reaction towards an allergic sensitisation.

Therefore, shifting the immune response back to the Th1 path could help suppress the hypersensitised reaction that stems from overactive Th2.

A common skin disease associated with chronic skin inflammation and eczema is atopic dermatitis (AD). As with other allergies, AD has a higher prevalence in individuals growing up in more sanitised environments and the number of incidences have increased within the past decades in the industrialised world.5 AD is characterised by itchy dry skin with an impaired barrier function. On a molecular level, the immune response in AD is shifted towards Th2 activation and IgE-mediated sensitisation towards environmental allergens. The severity of AD is correlated to the levels of IgE production, but the underlying mechanism remains to be unravelled.6 Another characteristic of AD is the elevated expression level of interleukin-8 (IL-8), a pro-inflammatory cytokine.7 Furthermore, the impaired skin barrier function typical for AD leads to an increased risk for bacterial infection, mainly with the organism Staphylococcus aureus.8 This adds to the vicious cycle of recurring irritation and inflammation.

But how could an overactive immune system as in the case for AD be rebalanced to an appropriate response to allergens on the skin? It has been shown that the Toll-like receptors (TLR) in keratinocytes play an important role in the activation of the Th1 response. When the skin is exposed to allergens together with a TLR ligand, it can help to shift the immune response balance towards the Th1 path, preventing Th2-mediated oversensitisation of the skin.9

MgCM-Glucan – designed to rebalance the skin

MgCM-Glucan (CM-Glucan Forte/INCI: Magnesium Carboxymethyl Beta-Glucan) is a polysaccharide, b-(1,3)-Glucan, derived from cell walls of baker’s yeast. It was carboxymethylated to improve the molecule’s water solubility and modified to contain magnesium as a counter-ion to increase structural stability (Fig. 2). In addition, magnesium ions were reported to positively influence epidermal proliferation, differentiation and skin barrier function as well as to possess anti-inflammatory properties.

b-(1,3)-Glucan has been reported to bind the Toll-like receptor TLR2 on keratinocytes and thereby evoking the Th1 immune response when pathogens are in contact with the skin while repressing Th2 activation.10 This immune ‘training’ by MgCM-Glucan (now referred to as ‘the new yeast cell active’) could counteract the skin imbalance and irritation (Fig. 1b).

IgE release
CD19+B cells were cultured for 2 hours either in assay medium alone or in medium containing the new yeast cell active. To mimic a Th2 response, cells were treated with a mix of anti-CD40 and the cytokine IL-4 to stimulate IgE production for 14 days. Quantification of secreted IgE antibodies was carried out by ELISA.

IL-8 release
Reconstructed human epidermis (RHE) was pre-treated with assay medium alone or medium containing the new yeast cell active for 2 hours. This was followed by a 24-hour treatment with a mixture of the cytokines IL-4/IL-13/IL-22/TNF-α. IL-8 expression was quantified by RT-qPCR.

Staphylococcus aureus adhesion to reconstructed human epidermis
RHE was pretreated by topical application on the surface of the epidermis of either the new yeast cell active or PBS solution as a control for 2 hours at room temperature. The RHE surface was cleaned and either topically treated with the new yeast cell active and radiolabelled S. aureus bacteria or PBS and radiolabelled S. aureus for 1 hour. RHEs were washed and remaining radioactivity was measured by liquid scintillation counting.

Clinical studies
Skin parameter measurements: A doubleblind clinical trial was performed with 20 volunteers (average age 44 years) diagnosed with AD but free of symptoms during the study. They applied a placebo cream on the inner side of one forearm and the same cream containing 0.1% new yeast cell active on the inner side of the other forearm twice daily for 28 days. After 14 and 28 days, skin hydration, roughness and TEWL were measured using a Corneometer MPA5 CPU, PRIMOS and Tewameter TM210, respectively.

Self-assessment: 10 volunteers (average age 58 years) with AD applied an aqueous solution containing 0.04% new yeast cell active on an area with eczematous skin twice daily for 7 days. Before and after the study, volunteers filled out a questionnaire about their skin condition on the treated area, giving scores on a 10-point scale.

Using reconstructed human epidermis (RHE), IL-8 production was stimulated by treatment with a mixture of proinflammatory cytokines. Expression of IL-8 was decreased by 53% in the RHE when pretreated with the new yeast cell active compared to stimulated but not pretreated samples. Together this shows that the new yeast cell active is able to reduce the expression of two players in the inflammatory response in vitro that can lead to skin eczema.

Restoration of skin barrier, hydration and wellbeing
In order to test the efficacy of the new yeast cell active in vivo, a double-blind, placebo controlled clinical study was performed with volunteers that were diagnosed with AD. Topical application of the new yeast cell active for 28 days significantly increased skin hydration, smoothness and reduced TEWL (Figs. 4-6), resulting in a less irritated skin with an improved barrier function.

In a second clinical study, volunteers suffering from AD rated different aspects of their skin condition of a body part with eczema using a 10-point scale ranging from best (no disturbances at all) to worst (frequent and important occurrence of skin disturbances). After 7 days of treatment with an aqueous solution of the new yeast cell active, a significant improvement in several visual and perceived aspects of the eczematous skin was reported by the volunteers (Fig. 7). The highest positive change was observed for the self assessment of redness and roughness of the skin. Due to these improvements, 70% of the volunteers also reported a significant increase of general wellbeing of their skin.

MgCM-Glucan is an active designed to rebalance the skin’s immune system by repressing the Th2 path, which became overactive in our modern, clean world. As a result, MgCM-Glucan was able to reduce the extent of Th2-mediated immune response and impair adhesion of S. aureus to the skin in vitro. Experiments in vivo showed that MgCMGlucan improves the skin barrier and hydration to help those suffering from oversensitised dry skin to feel more comfortable in their own skin.

1,4-Dioxane Online Calculator launched in US