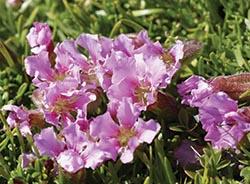 To cope with a harsh environment S. pumila developed adaption strategies, repair mechanisms and protective compounds. These precious substances have now become available for skin care. An extract made from callus cells of S. pumila was shown in vitro to protect dermal stem cells against UV-induced stress and to maintain their stem cell properties.

During the last glacial age, which ran from 110,000 BC until 10,000 BC, large parts of the northern hemisphere were covered under a thick sheet of ice. The climatic conditions in the coldest stage of the ice age were very harsh with dramatically decreased temperatures.1

These conditions presented a challenge and threat not only to man and animals but also to all plant species. During this period over 90% of all terrestrial life vanished from the northern hemisphere; only few organisms were robust and adaptable enough to survive.

A small number of plant species managed to escape the ice by moving to ice-free mountain peaks; so-called nunataks. In these glacial refuges water could be found in liquid form for the assimilation by plant roots. It should be emphasised, however,  that only the most specialised of high alpine species were able to survive on nunataks.2 A representative of this family of extremophile plants is Saponaria pumila,3 a cushion plant only a few centimetres high bearing large pink flowers. In order to survive constantly low temperatures and high UV radiation S. pumila developed efficient repair mechanisms and protective compounds. Could the human skin be protected by the same molecular compounds and mechanisms?

Solar UV radiation causes direct or indirect damage to vital cellular constituents such as DNA, proteins and lipids, thereby affecting a cell’s function and viability. Unlike UVB, UVA can penetrate into the lower dermis and generate excessive amounts of reactive oxygen species.4 The resulting oxidative stress induces senescence in dermal stem/progenitor cells.5 These cells however are important for skin homeostasis and repair of the extracellular matrix, which determines the mechanical properties of the skin. In the present study we investigated in vitro the effect of an extract of Saponaria pumila on human dermal progenitor cells for the purpose of protecting these skin cells against UVinduced stress and preserving their regenerative potential.

S. pumila on human dermal progenitor cells against UV-induced stress
S. pumila is rare, in some alpine regions it is even a protected plant species and therefore of limited availability as a source for cosmetic actives. Thus, a plant cell culture technology was used to produce large-scale cultivation of S. pumila cells. S. pumila cells are obtained by injuring germinated sprouts, the healing of the cut surface starts with the formation of a socalled callus. These callus cells are then cultivated in a nutrient medium and largescale production is achieved in a specialised bioreactor system. An extract of the S. pumila callus cells was used for the subsequent in vitro experiment: an enriched human dermal progenitor cell culture was established as a test system by means of the progenitor cell targeted technology (CELLnTEC). Progenitor cells are cultivated in a rich medium, which resembles the conditions in their natural environment. Dermal stem cell activity is assessed based on the characteristic property of dermal progenitor cells to grow in three-dimensional spherical colonies. Furthermore, sphere size served as an observable indicator of cell viability in this assay. Dermal progenitor cell cultures were exposed to a xenon broad-spectrum (300 nm to 800 nm) light source at 3 J/cm2 to induce oxidative stress. Human skin-derived mesenchymal stem cells are known to be especially prone to oxidative damage, since they do not have any effective defence mechanism.6 As expected, UV irradiation of cell cultures lowered the cells’ ability to form spheres. However, cultures supplied with 0.5% S. pumila callus extract exhibit a 35% higher sphere-forming capacity compared to the control culture. Moreover, dermal progenitor cells treated with S. pumila extract reveal a slightly higher proliferation potential as indicated by the higher percentage of large spheres >100 mm (Fig. 1). Interestingly, the ability to form large spheres is even maintained after UV irradiation, whereas the untreated dermal progenitor cells have lower or limited proliferation potential, they form only small and medium sized spheres.

Pre-treatment of the skin

S. pumila fortified cream protects against stressful conditions during beach holidays
A cream containing 1% S. pumila callus extract (PhytoCellTecTMnunatak®/INCI name: Saponaria Pumila Callus Culture Extract (and) Isomalt (and) Lecithin (and) Aqua/Water) was tested in a clinical study on healthy volunteers, average age 56. The aim of the study was to evaluate whether pre-treatment with a basic cream containing S. pumila callus extract fortifies the skin against stressful conditions. Skin roughness (Rz) was chosen as observable parameter. A special assessment criterion included that the volunteer’s skin had not been adapted to intense sunlight prior to the study. Verum and placebo cream were applied twice daily, one to each side of the face. Skin roughness (Rz) was evaluated by means of the Primos  technique at several stages during the study period. The study outline is summarised in Figure 2.

In brief, volunteers pre-treated their facial skin for two weeks (t1) before enjoying beach holidays (t2) where they got exposed to UV radiation and seawater. During holidays volunteers applied sunscreen in addition to placebo and verum. The final Rz data were collected after a two-week recovery phase (t3). Rz values monitored at time point t1 reveal that neither verum nor placebo cause significant changes in the skin texture compared to initial conditions (t0) (Fig. 3). Of great interest are the Rz-values collected at time point t2: the placebo treated side of the face reveals a significant increase in skin roughness. The Rz-value for the verumtreated side of the face, however, remains almost unchanged. These results indicate that a cream with S. pumila callus extract prepares and supports the skin to cope successfully with stressful conditions. In addition, dermatologist observed that lines and wrinkles around the eye area are visibly less pronounced on the verum treated side of the face (Fig. 4).

Another clinical study was performed for the purpose of analysing the effect of a topically applied cream containing 0.4% S. pumila callus extract on the cutaneous structure by using high-frequency ultrasound (Dermascan C, Cortex Technology). Ultrasonography allows the quantification of dermis density and the monitoring of changes in the dermal architecture, which are important parameters for the assessment of the cutaneous regeneration process.

The ultrasonograpic wave generates an echo when it is partially reflected at the boundaries between different tissue structures. The intensity of the reflected echoes can be evaluated and visualised in colour images. The collagen and elastic fibre structure of an intact dermis yields many reflections visible as bright colours in the ultrasonographic image (Fig. 5). However, disruption of this regular architecture leads to weaker reflections and dark patches. This so-called subepidermal low-echogenic band (SLEB) is characteristic for aged and photo-damaged skin and often found at highly sun-exposed body parts.

Changes in SLEB of 20 volunteers of average age 53 were monitored by analysing ultrasonographic images taken from their forearms before and after treatment. Results clearly show that the SLEB is reduced (Fig. 5) after 28 days of treatment and the echogenic structure of the dermis improved. Dermal tissue density increased by almost 10%. Mechanical properties of the skin were monitored in the same study: skin firmness and elasticity were measured by means of the Reviscometer system and the Cutometer SEM. After one month of treatment skin firmness was significantly improved by 14% and elasticity by 7%, both compared to placebo.

Saponaria pumila is one of the few plant species that survived the last ice age on nunataks. It has evolved unique adaption strategies to deal with the harsh and unfriendly climatic conditions. This extremophile cushion plant can nowadays be found in crevices on cliffs at altitudes of 2500 m to 3600 m. Because of its limited availability we used the plant cell culture technology to produce large volumes of S. pumila callus cells. An extract made of these callus cells was shown in vitro to protect human dermal progenitor cells against UV-induced stress. Dermal stem cells are responsible for maintaining and repair of the extracellular matrix. Clinical studies prove the efficacy of this novel active in the cutaneous regeneration and restructuring process.