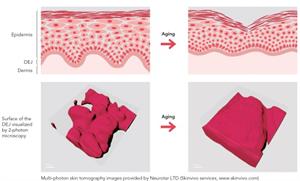 In the summer, persisting snow fields on high mountains are sometimes tinged with a red, pink colour. This phenomenon is caused by the snow alga Chlamydomonas nivalis. It is a unicellular member of the green algae that changed colour by producing carotenoids for protection against high ultraviolet radiation.

A tube photobioreactor was developed to produce snow algae raw material. In the first stage, optimal light and aeration was used to grow the green algae for three weeks doing photosynthesis in order to reach biomass. In a second stage, nutrients were reduced and light increased over two weeks to induce the formation of stress response molecules. Snow algae harvested at this stage were homogenised at 1200 bar in a phospholipid solution to open the cells and to form liposomes for enhanced skin penetration.

Preparations of the extremophile snow algae were tested for anti-ageing effects in cultures of skin cells and in clinical studies. The algae extract was found to stimulate the longevity gene Klotho and to activate the protein AMPK which is a master switch in cellular energy metabolism.

Klotho, named after a Greek goddess of fate, is a longevity-related gene, discovered in 1997. The Klotho protein mediates its longevity effects by inhibiting the insulin/IGF-1 signalling. Suppression of this signalling pathway is regarded as central mechanism in the calorie restriction-induced longevity phenomenon. In a replicative ageing model with primary human fibroblast cells, the expression of the Klotho gene was found to be down-regulated in aged cells. Treatment of aged cells with the snow algae extract induced an up-regulation of Klotho expression to a value even beyond that of young cells.

The AMPK is a cellular sensor for energy which is activated by an increased AMP/ATP ratio indicating low energy. During calorie restriction and after exercise AMPK activity is increased to restore ATP levels. But the role of AMPK is not restricted to the control of the energy metabolism. AMPK was shown to regulate several transcription factors related to cellular defence and protection systems indicating its role as anti-ageing factor. In a cell culture model with primary human keratinocytes, the snow algae extract was found to stimulate activation of AMPK.

Reversing the effects of time 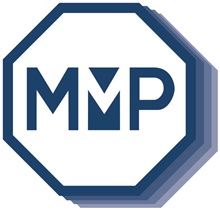 Since 1984, MMP, Inc. brings a concept of highly individualized assistance and service, striving to provide our clientele with unique resources. At MMP our mission is to manufacture raw materials of the highest quality for cosmetic and personal care applications with customized service. Our team is continuously working on the development of...